When the Wave Community Church launched their first worship gathering on Easter 2015, they could not have imagined what would happen on Easter this year. Their young church of 100 people drew 500 people to a drive-up Easter service that they hosted in a parking lot just outside of Deshler, Ohio, a town of about 1800 people.

When churches in Deshler closed because of the shelter-in-place order in mid-March, the Wave Community Church had been planning their Easter worship gathering. Pastor Alex Ruhter proposed a community-wide drive-up Easter service. After running it by area pastors, he began planning the event.\

In preparation for the Easter service, the church rented a local restaurant’s parking lot. The gravel lot provided space for about 200 cars spaced six feet apart. The church sent out 2000 mailers and utilized social media advertising to invite the community. They hoped for 500 people to attend, believing that the event might attract more people who wouldn’t ordinarily come to a church.

On Easter, volunteers set up communion tables at the entrance to the lot, and visitors picked it up through their car windows. Volunteers in bright orange directed cars while other volunteers held signs that read, “Tune to FM 92.3.” As cars filed into the lot, the worship team played and pastors, Alex Ruhter and Justin Deuel, greeted people.

With windows rolled up, attenders listened to the worship and teaching through their car radios, and they followed along with song lyrics through the church’s app. During the communion time, a team of people walked through the parking lot, laying hands on each car and praying for the people inside. As the cars left the lot, the pastors stood at the exit, thanking each carload for visiting.

In the weeks that followed, the Wave received emails of thanks from people who had attended the service, many who have never attended any worship gatherings. 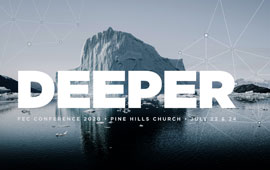